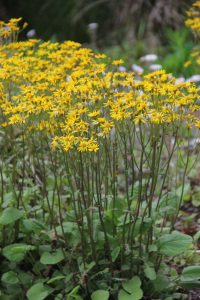 Golden ragwort is one of about 64 species in the genus Packera, named in honor of Canadian botanist John G. Packer.  For many years all ragworts were placed in the large genus Senecio, though even in the 19th century Asa Gray recognized that the North American species were rather different from Senecio elsewhere in the world, dubbing them the “aureoid” or golden senecios.  Modern genetic analysis bears Gray out.

Packera aurea is aureoid indeed with its brilliant yellow cluster of daisy-like flowers.  It thrives in moist, shady conditions, and can spread rapidly.  Note its distinctive leaves: the basal ones are large and oval, but those of the flowering stem are alternate and lacy-cut.  You won’t see many insects nibbling on them, however: like many Packera and Senecio, this species is packed full of toxic pyrrolizidine alkaloids. While this plant has a long history of medicinal use, it is best avoided as these potent alkaloids can cause serious liver damage.