Historically, HBS has been intimately tied to the small town of Highlands, North Carolina which is unique in many ways. Highlands boasts the first public library in North Carolina, the first land trust in the state, and rich cultural opportunities (e.g., a summer playhouse, a visual arts center, a chamber music series). The location of the Station within the town limits puts shops and restaurants within easy walking distance, and the community is very proud of the Station and helps to support its programs.

Highlands and its immediate surroundings are arguably the most biologically significant area in the Appalachian Mountains. The Station is located near the crest of the Blue Ridge on a high plateau at an elevation of 4,000 feet (1,200 m); the town lies just west of the main drainage divide of the eastern part of the continent. Surrounding peaks on the Blue Ridge exceed 5,000 feet (1,500 m) in elevation. We are close to several mountain ranges, including Cowee, Balsam, Great Smoky Mountains, and the Nantahala. South and southeast of the Highlands Plateau is a series of river gorges, with some of the highest waterfalls in eastern North America. These rivers include the Toxaway, Horsepasture, Thompson, Whitewater, and Chattooga. The latter has been designated a National Wild and Scenic River and flows through the Ellicott Rock Wilderness Area. Much of the land in the vicinity of Highlands is part of the Nantahala National Forest. Sections of the Pisgah, Chattahoochee (Georgia), and Sumter (South Carolina) National Forests are also nearby.

The Coweeta Hydrologic Laboratory, a USDA Forest Service research facility, is about 18 miles west of HBS. Its 2,185-hectare is frequently used by HBS researchers, and cooperation between the two research stations has increased in recent years. Researchers at HBS have been funded to participate in the All-Taxa Biodiversity Inventory (ATBI) in Great Smoky Mountains National Park, as well as in surveys of the new Gorges State Park and the Blue Ridge Parkway, all of which are close enough for day field trips.

The Highlands area is characterized by relatively mild temperatures, with summers being especially pleasant, as daily maxima rarely exceed 80º F (27º C). Precipitation is higher than at any other site in eastern North America, averaging 80-100 inches (2,000-2,500 mm) annually. The location of the Station near the southern edge of the Blue Ridge affords easy access to a great variety of plant communities over a gradient in elevation of 6,000 feet (1,800 m), extending from oak-pine and bottomland hardwood forests of the Piedmont, mesophytic cove forests of the Appalachian slopes, and grass and heath balds and spruce-fir forests on the summits of the higher peaks. The area is renowned for the diversity of its plant and animal life, as documented in an article in BioScience (Ricketts et al., 1999), and few regions outside the tropics offer such opportunities as the southern Blue Ridge for analytical and experimental work in ecology, systematics, and evolution.

To see near-real time, weather data, click the graph below! 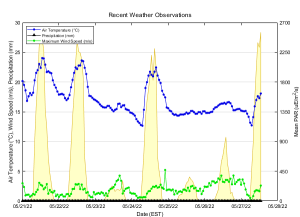