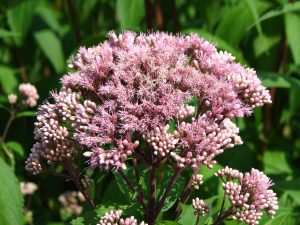 Commonly known as “Joe-Pye-Weed”, Eutrochium malculatum var. maculatum is a staple herbaceous perennial. The flowers, pinkish color, emerge in late summer and persist until mid-fall signaling that the dog-days of summer have arrived.

The distribution is wide across the Eastern and Midwestern United States and locally can be found in disturbed wetlands, moist grasslands and meadows. Reaching a height of 7’ in some cases this plant towers high above others in landscape. It’s whorled leaves are a distinctive vegetative feature in addition to the purple spotted stems.

It attracts a wide variety of pollinators like bees, butterflies, moths, and beetles. A most notable frequent visitor is the Tiger Swallowtail (Papilio glaucus).