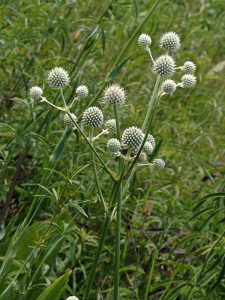 A plant with striking architecture and an equally interesting common name, in this case, Rattlesnake master falls into both. This herbaceous perennial enjoys full sun and is one of the more ubiquitous Eryngium species. The leaves are thin with rough margins which resemble that of another plant, Yucca sp. which resulted in the botanical epithet yuccifolium. The range for this particular species stretches throughout the Eastern US and into the Midwest.

The Meskwaki Nation of Indigenous Americans were one of the first groups to introduce alternative uses for Erygium yuccifolium. It is said that it’s roots and sap were used to prevent rattlesnake bites and the flowers were used in ceremonies.

The set of pollinators for this species are abundant. Contrary to most plants in the carrot family (Apiaceae), Rattlesnake master has spherical flower heads which are attractive to a variety of bees, beetles, and other insects.