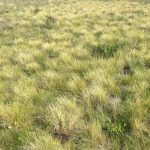 This perennial, cool-season grass is commonly called “Tufted Hairgrass”. It’s distribution is widespread throughout the United States, however, in North Carolina, D. cespitosa is at the southernmost end of its range and as such, is a rarer species in-situ.

Habitats are predominately rock outcrops (mafic, dolomitic,  calciferous), fens, meadows, and stream banks. Being that this plant is from the grass family (Poeaceae), the inflorescences are less pronounced than one might typically envision, but still significant. Wispy panicles, with small florets emerge in mid-summer, reaching heights between 30 and 50 cm.

As with all native perennial species, “Tufted Hairgrass” can be beneficial to our fauna and insect species even during dormant months. Once D. cespitosa has produced an inflorescence, the grass can be left to overwinter, providing shelter and habitat during the cold months. When the signs of spring begin to present themselves, in late-March to April, it can be cut back and primed for a new flush of growth.