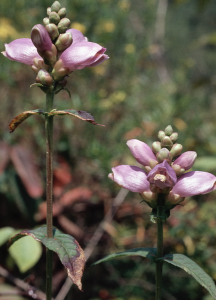 Primarily a turtlehead of higher elevations in the southern mountains, this pink-flowered species has been a hit in the horticultural community since its introduction by the Scottish-American horticulturist John Lyon in the early 19th century.  Lyon followed in the footsteps of Bartram and Michaux, hunting plants extensively in the southern Appalachians from 1807 to 1809, including our area.  Silas McDowell (1795-1879), the farmer and horticultural writer commemorated by a historical marker on the Cullasaja Road, assisted Lyon in collecting plants on Grandfather Mountain.  The turtlehead that bears Lyon’s name was collected by him somewhere in our region, but he does not record the locality, simply noting in his 1812 catalog: “Chelone, sp. nova (beautiful).”  Lyon’s entry indicates he knew his find was a Turtlehead, but a “species nova” or “new species” as yet unnamed.  His friend Frederick Traugott Pursh (1774-1820) later named this species in Lyon’s honor.

The genus name Chelone is derived from the Greek word for turtle, but is this because the flowers resemble the domed carapace of turtles, or the head of a turtle gape-mouthed?  I suppose they resemble both at different times, depending on whether the flower is fully open.  See p. 30 of A Naturalists Guide for Cuthbert’s Turtlehead, found in the wetland zone.  `