History of Research at HBS

The institution that was to grow into the Highlands Biological Station was established in 1927 as the Highlands Museum Association, initiated by a group of local citizens at the suggestion of Clark Foreman (1902-1977), grandson of the founder of The Atlanta Constitution and a member of the Roosevelt Administration’s Interior Department from 1933 to 1941.  Foreman served as the first President of the Association, which opened its museum in a one-room addition to the Hudson Library on July 4th 1928.  At the suggestion of Foreman’s friend, the American Museum of Natural History herpetologist Clifford Pope, Foreman and the museum’s governing Board moved to expand the scope of the organization to research, inviting noted UNC Chapel Hill botanist William Chambers Coker and Vanderbilt University zoologist Edwin Reinke to consider basing their work in Highlands.  Both biologists responded enthusiastically, and the fledgling museum took action to provide research infrastructure. 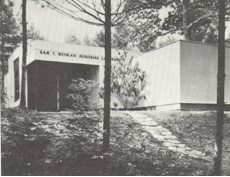 Located at 35.05N, 83.19W and nearly 4,000 ft (1,220 m) in elevation, the Highlands Plateau is characterized by mild summers, cold winters, and the highest precipitation in eastern North America, averaging 80-100 in (200-250 cm) annually.  Its location on the southern edge of the Blue Ridge Escarpment affords ready access to a variety of plant communities over a nearly 5,000 ft (1,524 m) elevation gradient, extending from the oak-pine and bottomland hardwood forests of the Piedmont, through the mesophytic cove forests and rock outcrop communities of the Appalachian slopes, to the grass and heath balds and spruce-fir forests on the summits of the higher peaks.  The Station’s founders may not have realized that few regions outside the tropics offer such opportunities as the southern Blue Ridge for empirical work in ecology, evolution, and organismal biology, but the scientific community soon realized that the Highlands Biological Station provides a research base in the midst of a temperate-zone biodiversity hotspot.

The Highlands Museum and Biological Laboratory, Inc. opened its first research laboratory in 1931.  The Sam T. Weyman Memorial Laboratory, designed by Oscar Stonorov with Tucker & Howell, architects, received acclaim as the first example of the International Style of architecture in North Carolina and was often cited as a foremost example of the Modern Movement in the US.  Later remodeled as the Station’s dining hall, the Weyman building today little resembles the original design, unfortunately.  For over 30 years, however, the Weyman Laboratory was the center of research at HBS, a period in which Station-based research productivity increased dramatically.

In the late 1930s construction began on the Station’s Museum; designed and built by the WPA and opened in 1941, the museum and associated amphitheater was a natural counterpart to the research laboratory embodying the joint research and educational mission of HBS.  Officially named for visionary HBS founder Clark Foreman, today the Museum is known informally as the Highlands Nature Center.  Among its many public programs, the Nature Center is an important venue for scientists working at the Station to share their research and knowledge with the community at large.

Research activity at HBS snowballed through the 1940s and 1950s; the rich diversity of the region attracted researchers working on many different taxa and systems, which in turn led to growing support from the State of North Carolina and the National Science Foundation.  During the tenure of Thelma “Doc” Howell in the 1950s and 1960s, additional research infrastructure was built with the inauguration of a series of intensive field studies of the escarpment river gorges.  It was at this time that the main lab at the Station, the William Chambers Coker Laboratory, was completed, along with the first residences at HBS (Howell, Wright, and Deacon Cottages).  An Aquatics Laboratory was built soon after, and in 1962 the Highlands Botanical Garden was established on land donated by the Foreman family.  Now celebrating its 58th anniversary, this garden has developed into a premier native-plant botanical garden prized by casual visitors and botany classes alike.

In this period, too, HBS initiated a program of academic summer field courses, and the Grant-in-Aid program supporting research was inaugurated with NSF support.  Later taken over by the Highlands Biological Foundation, this program has now operated continuously for over 50 years, supporting thousands of research projects and hundreds of graduate theses and dissertations.  Research conducted at HBS encompasses biological systems as diverse as the southern mountain region itself: plants, insects, fungi, mammals, birds, fish, fungi, terrestrial and aquatic ecology, and especially salamanders have been the primary areas of interest, with studies ranging from taxonomy, systematics, ecology and evolution to conservation biology, ecophysiology and ecosystem and community ecology.  The southern Appalachian region being a temperate zone hotspot for salamanders, notably the lungless salamander family Plethodontidae, research on this group has been a major research focus over the decades.

In the mid-1970s HBS became a Center of the University of North Carolina system, and is now administered on behalf of the university system by Western Carolina University.  At that time the original non-profit research laboratory was reorganized into the Highlands Biological Foundation, Inc., a 501(c)(3) organization that remains closely associated with HBS. The Foundation is governed by a 32-member Board of Trustees.  Its mission is in part to promote the research and educational program of the Station.  For several decades the HBF has funded the HBS Grant-in-Aid program and provides annual scholarships to summer courses.

The Highlands Biological Foundation is sustained by donations, memberships (including a consortium of regional colleges and universities), and fundraising. Those who value the service that HBS has provided to the scientific community through its research and education programs are encouraged to become a member of the Highlands Biological Foundation, Inc. to support its tradition of funding research grants and financial aid at HBS!  A link to membership information can be found in the links section of this page at the bottom.

New research and instructional facilities continue to be developed at HBS.  With NSF support new teaching labs and classrooms were installed in the 1st floor of the Bruce Biodiversity building and the lower level of the Nature Center in 2009, and State funding provided a state-of-the-art molecular genetics laboratory — the “Tree-house Molecular Lab” — in the upper level of Biodiversity.  HBS recently received a major renovation of the Coker Laboratory, with a new design that yields fully modernized infrastructure and more research lab and teaching space than ever before.  The new-and-improved Coker Laboratory was dedicated in late 2012, ushering in a new era of research support.

A new research dimension at HBS was introduced in 2001 when the Station partnered with the Institute for the Environment (formerly Carolina Environmental Program) at UNC-Chapel Hill to offer a fall semester-in-residence program for undergraduate environmental studies and biology majors.  An individual research internship and group capstone research project are important components of this program.  Students are paired with a mentor from a local organization (town or county government, research lab, conservation nonprofits, business partners, USFS, etc.), tackling a project of mutual interest.  Over the years these projects have included policy, management, law, and scientific research.

Today HBS realizes its mission of education and research broadly through (1) support of scientific research and graduate training, (2) academic field courses in diverse areas of biology, (3) hosting visiting academic groups, and (4) offering diverse outreach programming for regional K-12 schools, the local community, and life-long-learners.  Each year dozens of scientists and hundreds of students flock to HBS to conduct research and learn immersion-style about aspects of the unique southern Appalachian. environment and biota.

The Station’s research legacy is manifested in the lengthy record of scientific papers, graduate theses and dissertations, and research internship reports stemming from work based at or otherwise facilitated by HBS. The complete HBS database record of research products will eventually be available for now, research products since 2000 are available online here.